Is Dairy Bad For You? - Allergy Test

EXTRA 10% OFF WITH COUPON: HALLOWEEN60

Is Dairy Bad For You?

We’ve been drinking milk for years and never had any problems, right? In fact, research suggests we’ve been drinking the white stuff for at least 6,000 years and look where we are now. We’re living longer than ever, we’re bigger, faster & stronger than ever, and we’re advancing as a species at an incredible rate. So if it isn’t broke, why try and fix it? Well, throat doctors used to recommend smoking and cocaine used to be used as “pep pills” by the military. The truth is, to evolve, sometimes we have to admit that what we’ve been doing hasn’t always been to our benefit. In fact, it’s the admission of our mistakes that have allowed us to advance as a species, which brings us back to dairy. Just because we’ve always drunk milk doesn’t necessarily mean we should be. So let’s take a look at whether dairy is bad for us and how the symptoms of lactose intolerance could hold the answer.

Dairy: Is It Normal To Drink Milk?

The fact of the matter is that we’re the only mammal species that drinks milk directly from other species. This shows that, generally, our consumption of cows milk is not the norm in the animal kingdom. Does this make it wrong? Well, not exactly. There are benefits to consuming dairy: 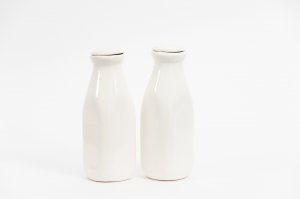 Great, pass the milk, right? Well, not necessarily. There are some cons to drinking milk:

So there are arguments both for and against drinking milk. There is also something else to consider…

You may have heard adverts refer to “lactose-free” alternative products; these are developed to help people who have identified that they’re living with something called lactose intolerance. Lactose intolerance occurs where your body is unable to produce sufficient amounts of the enzyme “lactase” to be able to break down lactose (which is the sugar found in milk).

If you’re experiencing any of these symptoms of lactose intolerance, you should take an intolerance test to determine whether lactose is the culprit.

So, Is Dairy Bad For You?

The (potentially unsatisfying) answer is; maybe. There are both pros and cons to consuming milk. It is down to the individual to decide whether they feel the pros outweigh the cons. Experiencing symptoms of lactose intolerance would point towards dairy being something you should consider removing from your diet, but you should take an intolerance test to make sure.